Plunge into the fascinating history of Al-Andalus by visiting the impressive Mosque-Cathedral of Cordoba, followed by a guided tour of the city’s Jewish Quarter (Judería in Spanish). 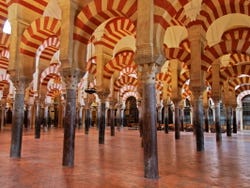 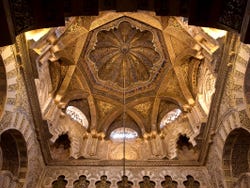 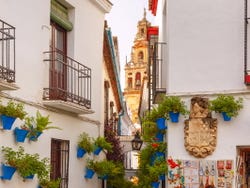 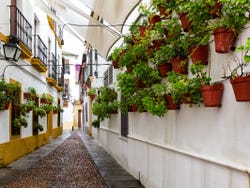 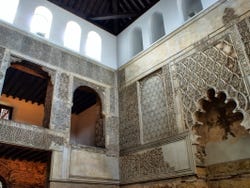 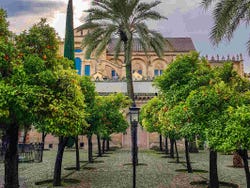 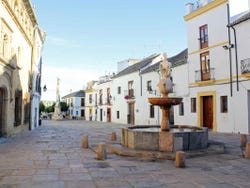 Meet your guide in the Patio de los Naranjos, near the Mosque’s bell tower and embark on a tour of the world-famous Mosque-Cathedral of Cordoba.

Cross the Patio de los Naranjos (former Caliphate courtyard) and walk straight into the stunning landmark. Wander through the halls packed with columns as you learn about Abd al-Rahman I. Responsible for founding the Muslim dynasty of Iberia and commissioning the construction of the religious site in the eighth century.

Next, admire the artwork and architecture of the mosque’s dome and mihrab, the most sacred part of the mosque. Discover the splendor of the Muslim dynasty during the reign of Abd al-Rahman III and how it was transformed into a Roman Catholic Cathedral when the city was conquered by King Ferdinand III of Castile.

After visiting the Mosque-Cathedral, set off on a walking tour of Cordoba’s Jewish Quarter (Judería in Spanish). The city, declared a UNESCO World Heritage Site, houses a charming Jewish Quarter with whitewashed houses.

During your walking tour of the Judería, you will visit the Synagogue of Cordoba, one of the three Medieval Jewish temples that still stand in Spain. Finish the tour at the same starting point, or if you prefer you can continue to discover the Jewish Quarter at your own leisure.

All of our providers comply with local legislation and applicable health recommendations to avoid the spread of Covid-19. Show more

Tours or activities will not consist of more than 25 people per group.

A safe distance of one metre between clients will be maintained whenever possible.

The use of masks is obligatory. The client must bring their own mask.

English speaking guide specialized in the history of Cordoba.

Entrance to the Mosque Cathedral of Cordoba.

You can book up to the start time, as long as there are places remaining. Book now to guarantee your spot.

Electronic. Show the voucher on your phone.

Wheelchair accessible. This must be indicated in the reservation.

All services published on Civitatis are carried out in accordance with our Sustainability Code. Specifically, this activity applies the following practices: Show more

No printing of documentation required.

US$ 31.40
Free cancellation up to 48 hours before the service starts
Book

Free! Free cancellation up to 48 hours before the activity starts. If you cancel under this time or do not show up, you will not be refunded.

These are genuine reviews written by our customers.

I travelled with friends
10

Fantastic informative tour. Tour guide very passionate about her City of Cordoba and it's history and monuments. Very well recommended tour in this incredible historic City.

I travelled with my partner
Show all the reviews
like

9.70 / 10 2,116 reviews
This tour of Cordoba's historic centre covers the ancient city's most iconic sights. Visit the Jewish Quarter, the Alcazar and the Mezquita with an expert guide
US$ 48.40
Book
like

9.60 / 10 1,746 reviews
Discover the "Shining City", the archaeological ruins of a Medieval citadel built in the first half of the 10th century by the first Caliph of Cordoba.
US$ 20.50
Book
like

9 / 10 603 reviews
Explore one of Cordoba's best kept secrets on this tour of its enchanting courtyards. Discover the origins of this ancient tradition with a passionate guide.
US$ 18.20
Book